On the List of Most Loved & Most Hated Veggies, Broccoli Wears the Crown

At the dinner table, it’s the classic battle of the veggies — broccoli is on the plate.

Your child clamps their mouth firmly shut and looks you in the eyes with a determined squint that lets you know—it’s on. Those little trees aren’t going down without a fight.

On the list of foods kids hate, broccoli may be #1.  Adults are not immune to distaste for broccoli either, sometimes feeling a strong aversion to what others consider a benign bit of healthy greenery.  Presidents are no exception.  In 1990, President George H.W. Bush stated emphatically:

I do not like broccoli. And I haven’t liked it since I was a little kid. And my mother made me eat it. And I’m President of the United States. And I’m not gonna eat any more broccoli! 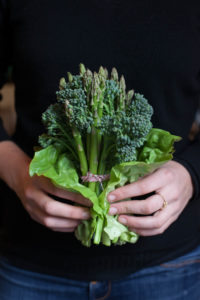 In response to his distaste of broccoli, the United Fresh Fruit and Vegetable Association pledged to send a number of truckloads of broccoli to the White House. Wearing a broccoli corsage, the President of the association gave First Lady Barbara Bush (who was emphatically #TeamBroccoli) a bouquet of broccoli and an additional ten tons of the vegetable to donate to local food banks.  The press ate it up. And in the tradition of the adage that there is no such thing as bad publicity, broccoli sales headed up.1

Over the years, broccoli has been celebrated and loved for the amazing, healthy vegetable it is.

Broccoli is packed full of minerals, fiber, nutrients and vitamins.  Research has shown that eating broccoli three to five times per week can lower the risk of many types of cancers, including breast, colon and prostate cancer.  It may also protect against the development of liver disease and cancer.2

But in spite of its great benefits and diversity, there are still those who claim it will never touch their lips. A new study published recently in the Journal of Agriculture and Food Chemistry reports that for some, there seems to  be a link between the microorganisms in the mouth and how certain people react to the sulfurous compounds in broccoli. People who react to these compounds may recoil from the smell and taste describing it as rotten and putrid. Yet there are still many of us who find its taste heavenly and healing. And, oh the recipes!

Interestingly, broccoli got a big boost in 1986 on Saturday Night Live when comedian Dana Carvey heralded the popular vegetable by singing its praises, literally. Fans of the show may remember the iconic piece known as Chopping Broccoli or The Woman I Know.  Dana hilariously used broccoli as the vehicle to underscore how easy it is to make anything into a swooning rock song. Seriously, what is better than chopping broccoli? 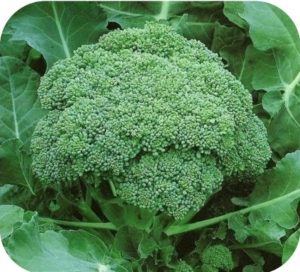 The Great American Seed Up is happy to continue the legacy of broccoli by offering a popular heirloom variety called Green Sprouting Calabrese.

This old variety was introduced in the late 1800’s in Italy.  Green Sprouting Calabrese Broccoli is popular with home gardeners and small farms because of the many off-shoots, maturing at different times, resulting in an extended harvest time.3

Broccoli is a cool-season crop that has its origins in the Mediterranean.  It was developed by the Etruscans of what’s now central Italy. Heirloom Italian Green Sprouting Calabrese broccoli is not grown on a commercial scale and is most often spotted at local farmers markets or in home gardens, which makes it that much more desirable and unique.

The Great American Seed Up invites you to scoop up a sizable amount to keep the heirloom tradition going and to celebrate this marvelous, controversial and delicious (to most) vegetable.

How does broccoli feel about being stalked by a bad reputation?  Be-leaf me, it’s steamed.